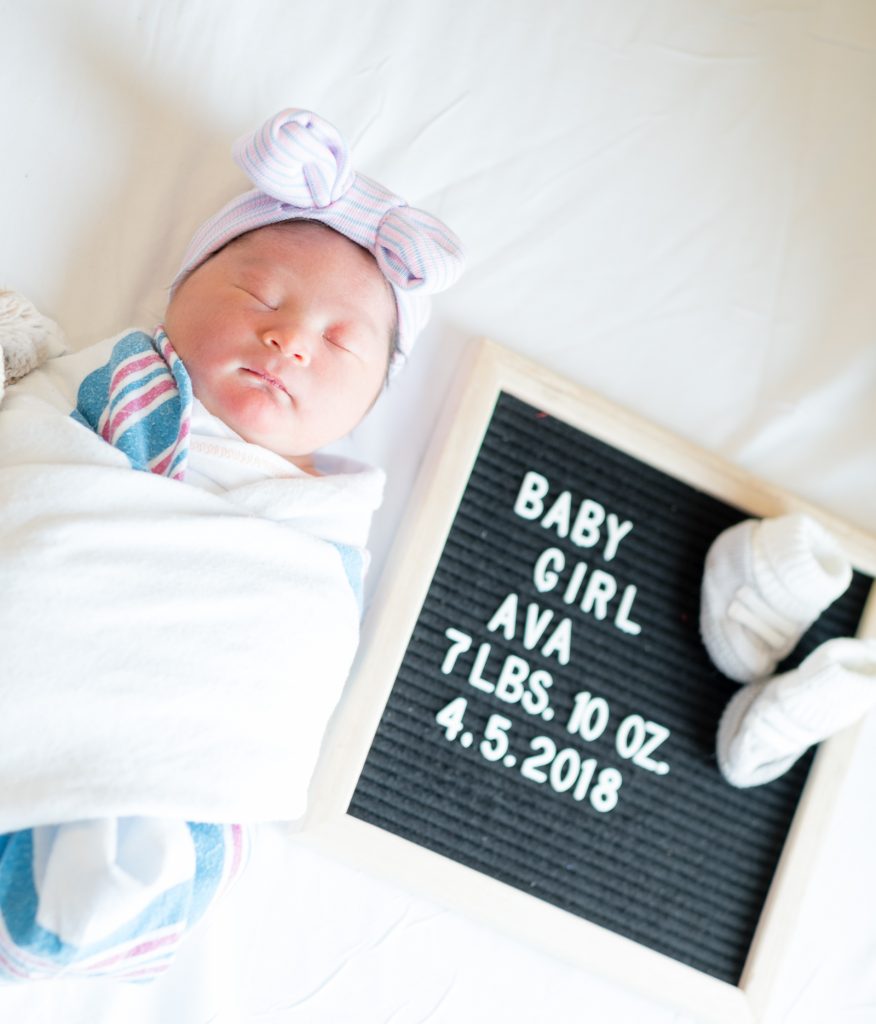 Welcome to the outside world!  We are so thrilled to introduce  Miss Ava Harper, born Thursday, April 5th at 12:11 AM at 20 inches long and weighing in at 7 pounds, 10 ounces (a whopping 9 oz. larger than her big brother and quite a surprise given I had to go back for extra ultrasounds as she had initially been measuring small).  Ava is a name that Nick and I both love and it was the first girl name we immediately agreed upon while pregnant with Bash, before we found out he was a boy.  Harper channels our nerdiness as a nod to our favorite library (William Rainey Harper Memorial Library) at the University of Chicago, where we met and subsequently had our engagement photo shoot. 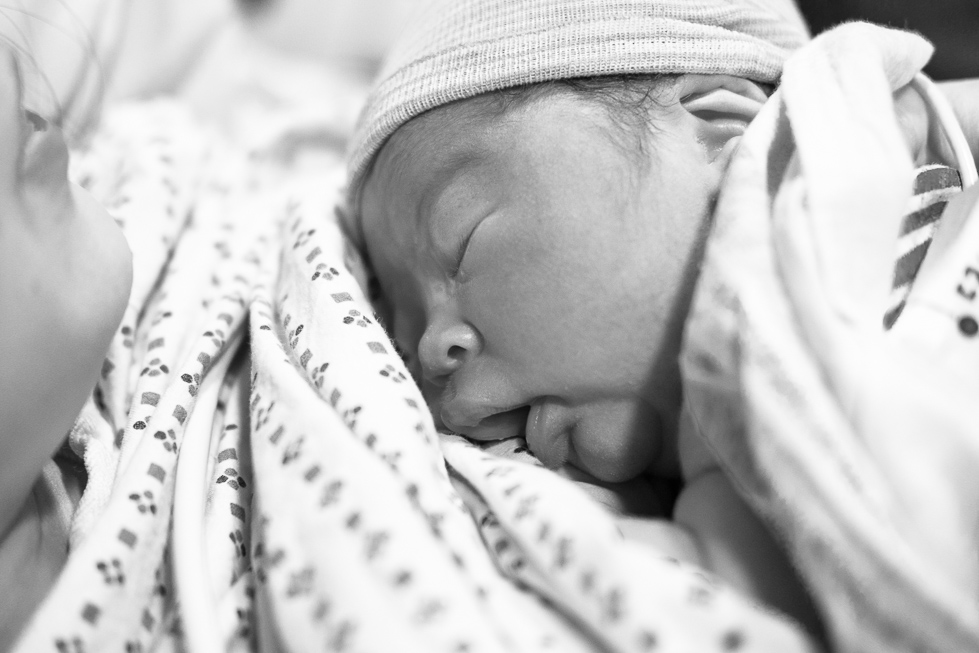 Ava was officially born 1 day before her due date, arriving promptly just after midnight on Thursday.  In the 2 weeks leading up to the big day, I kept having these feelings (and very strong Braxton Hicks) that she was going to be early.  On two separate occasions leading up to her birth, I thought my water broke, prompting a “rehearsal visit” to the hospital and an extra visit to the doctor. I even sent Nick out on a wild goose chase to every pharmacy on the Upper West Side in search of amniotic fluid pH testing strips (which we eventually gave up and succumbed to one of many Amazon same-day panic purchases).  These early “scares” led me to have my parents change their flight to arrive an extra week early.

Once my parents arrived, we were all on high alert, but I was glad for the extra help as we were going on the second week of Bash’s spring break and I was an exhausted, waddling mess.  As Wednesday rolled around I could tell something was different.  I woke up at 5 AM with some minor cramping and a slight backache but dismissed it as a sore back from a lot of walking.  Around noon, I texted Nick, “no progress on labor, but one of Bash’s corn seeds finally started sprouting…it’s a sign!”.  Although I was being sarcastic when I texted that, sure enough it was a sign. At 4:30pm the labor process began and I called Nick to hurry home from work. By 6:30, I was having regular contractions and they were getting more frequent.  The countdown had begun! With contractions 4-5 minutes apart I hurriedly did some last minute packing, got some dinner ready for Bash, and left final instructions for my parents as Nick ran out the door and I struggled to follow him.  My contractions started getting super intense during the ride to the hospital (possibly triggered by the wretched potholes on the 79th Street Central Park Transverse that I was silently cursing).  With fierce contractions coming every 2 minutes, it felt like the longest cross-town trip ever, and of course we hit traffic.  Later, Nick told me he seriously thought I was going to deliver in the Uber as he kept asking, “how much longer” every minute to the driver (who also probably thought I was going to deliver in the backseat).  Finally, we got to the hospital and Nick wheeled me up to Maternity Triage, where, for the third time, I swear my water broke.  By 9, I was admitted with my intense contractions 2 minutes 20 seconds apart and 5 cm dilated.  I couldn’t believe how quickly my labor had progressed.  With Bash, I stayed home much longer, took a shower, blow dried my hair, put on some makeup, packed my whole bag, and then thought I should go take a bath before Nick insisted that we actually leave for the hospital an hour after the doctor said we should come in.

Luckily for me, as soon as we got settled in our Labor & Delivery room, I got an epidural and started to relax.  (Side note: best advice from my first pregnancy – if you are considering an epidural, let them know at Triage or asap.  Even if your hospital has a dedicated L&D anesthesiologist, they may be tied up with other patients and it could take awhile for the order to come through).  At 10:30, I was 6 cm dilated and the doctor broke my water (yup, I guess I just have no clue what my water breaking will actually feel like!).  At this point it was just a waiting game.

After another round by the doctor, I was 10 cm and she asked if I was ready to start.  Right before midnight, the production started: the lights were turned on, spotlights came down from a compartment in the ceiling, the bottom half of my hospital bed folded down, and the medical team flooded the room.  During all of the commotion, I started getting shaky again due to nerves, but immediately calmed down and started to warm up with a “test push” to make sure I was using the right muscles.

I started my “official” pushing at 12:05 AM on Thursday morning and after 3 rounds, the doctor tells me to open my eyes immediately (it’s actually pretty hard to do 3 rounds of pushes held for 10 seconds each – I’m glad I kept up with my barre classes until week 37 and the L&D nurses were amazing as they made me feel like I was about to hoist the Stanley Cup!).  I couldn’t believe how fast everything was happening as I was just in time to see Ava being born at 12:11.  We immediately did skin-to-skin, something I didn’t get to do with Bash as he had to be examined by the pediatrician due to his more stressful birth.  I asked Nick if he counted 5 fingers, 5 toes and he responded yes.  The doctor jumped in and said, “um, you may want to count again…10 fingers, 10 toes”.  I was apparently deliriously adamant that our baby must have 5 fingers and 5 toes; go figure!

After 9 months, our precious girl, Ava, joined our family. It was such a joyful and tearful moment to hold her for the first time. I couldn’t stop staring at her beautiful face and as we bonded, Ava started rooting and latched immediately.  As it turns out, this would be indicative of her seemingly insatiable appetite!

Introducing Ava to the Family 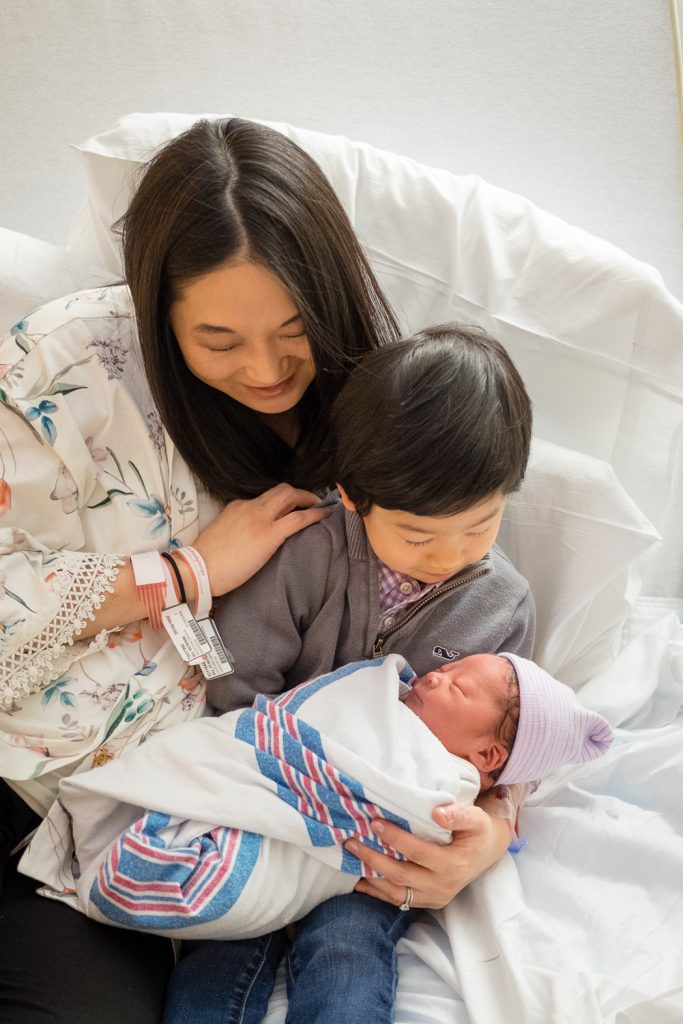 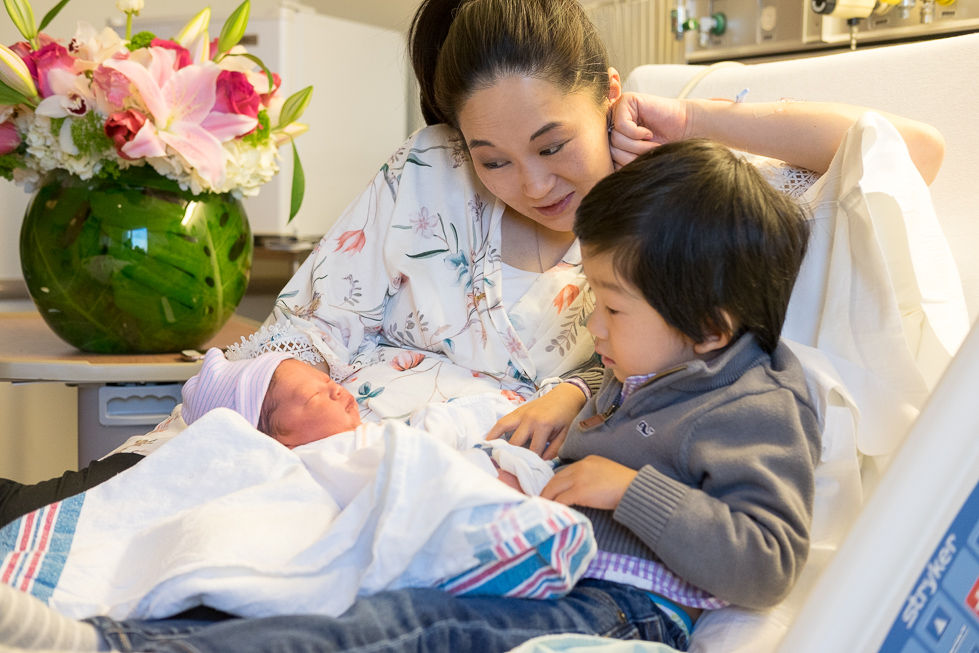 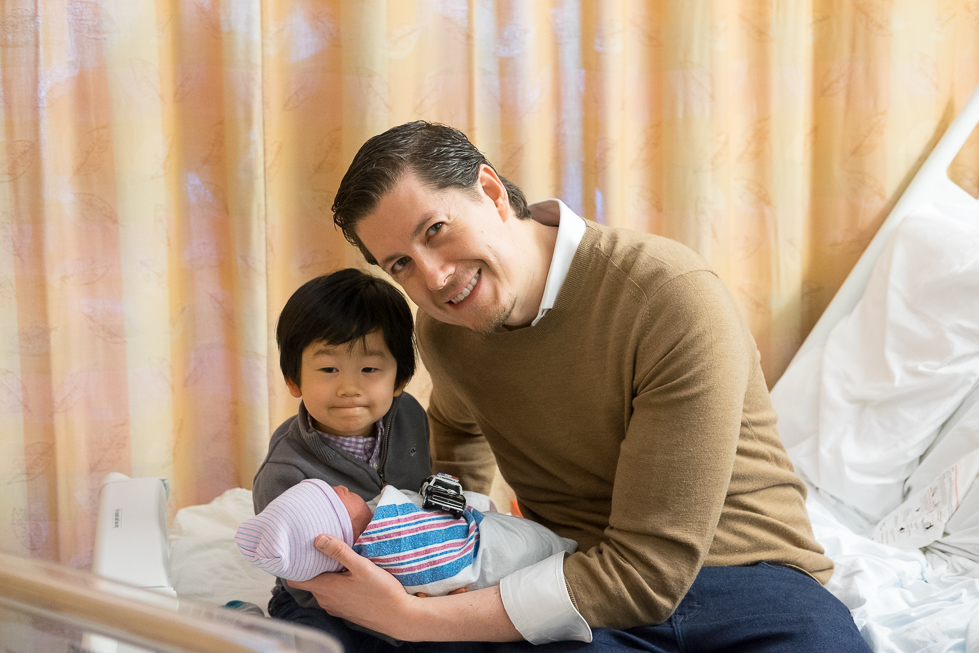 Later on Thursday, my parents arrived with Bash. I was a little worried how the first meeting would go. Would Bash be shy?  Would he be jealous of the attention she was getting?  Nick went out to meet Bash and bring him in the room.  We kept Ava in her bassinet while Bash walked in and I gave him a huge hug before he ran over to Baby Sister to say “hello, I’m your big brother”!  It melted my heart and my worries were gone. Bash loved holding Baby Sister and gave her lots of gentle kisses on the head.  Every time she moved her hand, Bash said that she was waving at him and he would wave back.  He gave her his stuffed bunny and was so excited that she gave him a #3 subway train and a police car, which made him feel very special. Later that evening we celebrated our first family dinner together in true NYC fashion with some Mexican takeout food. 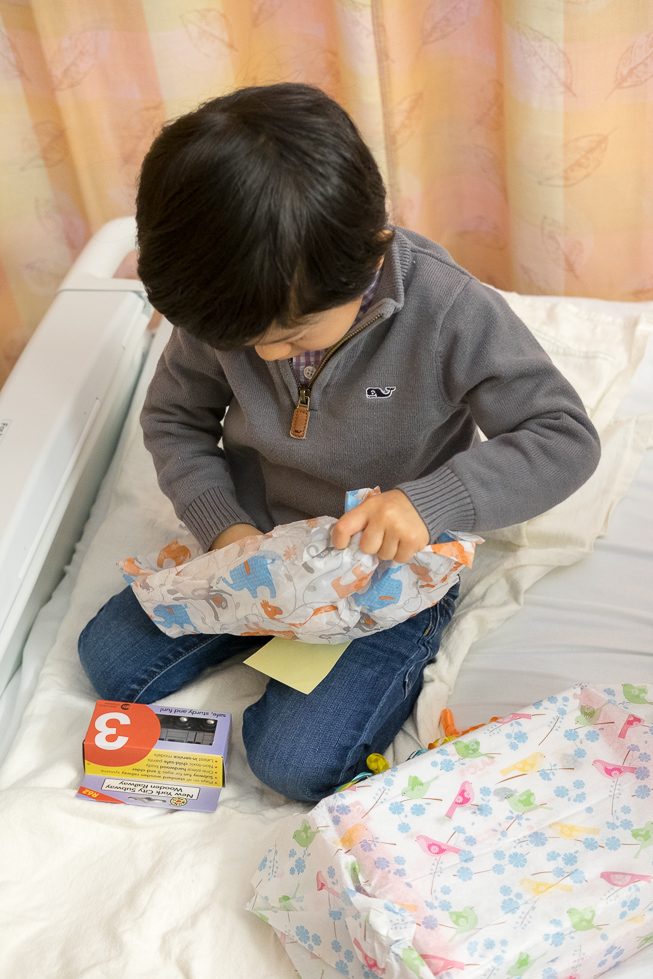 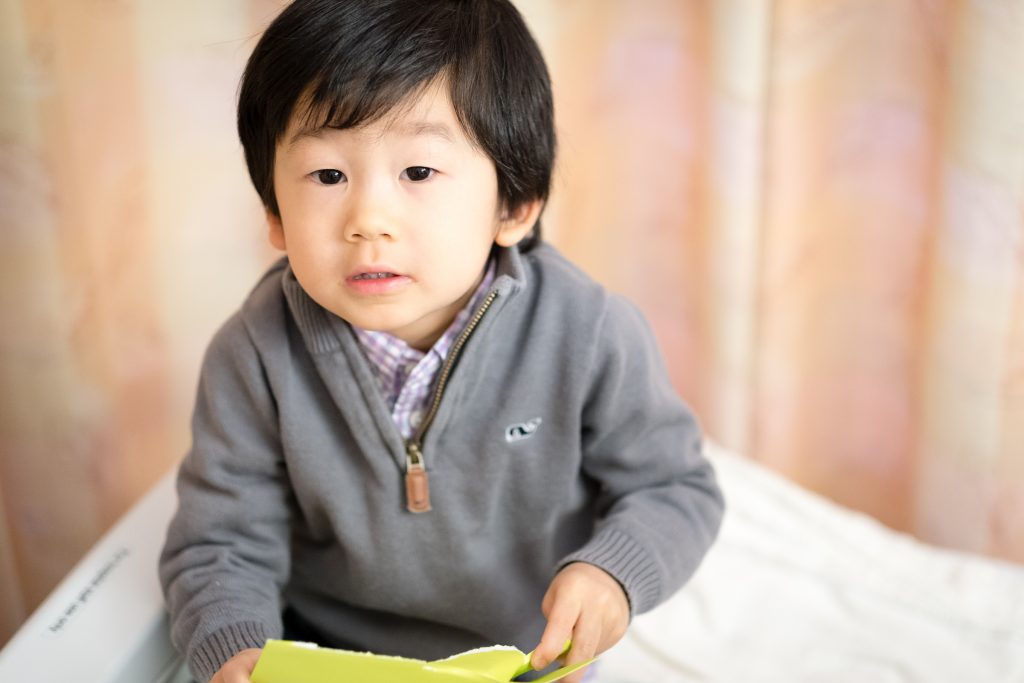 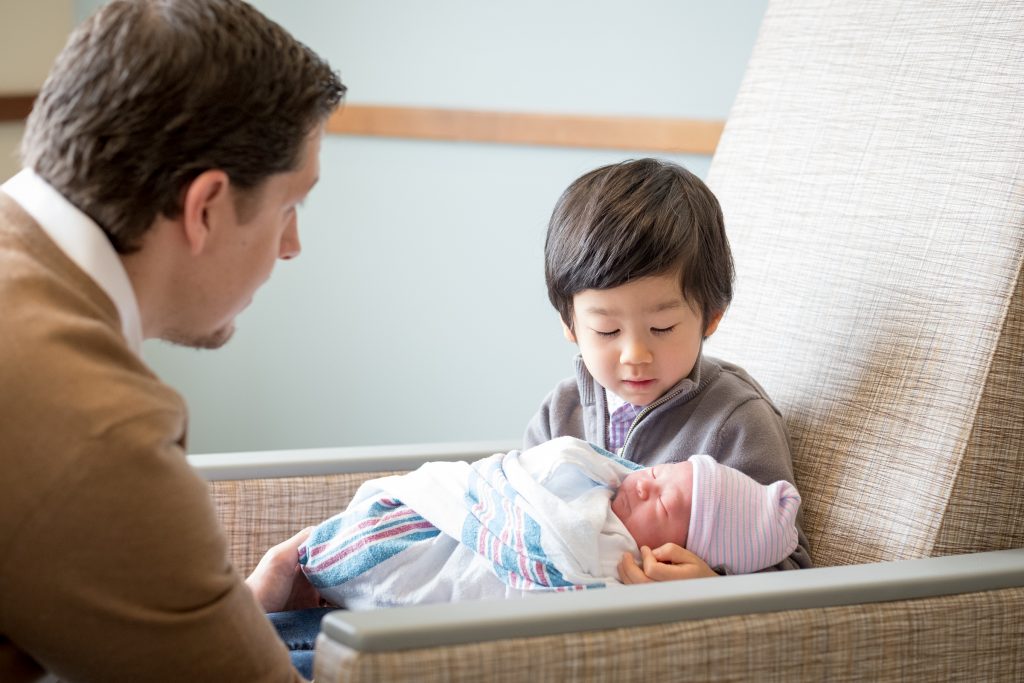 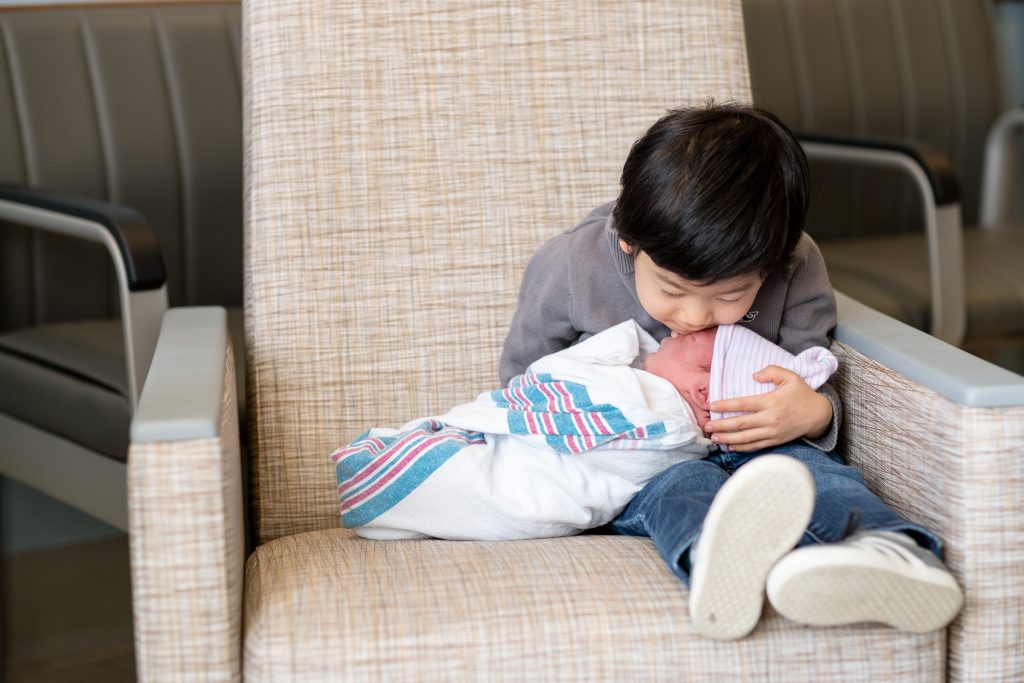 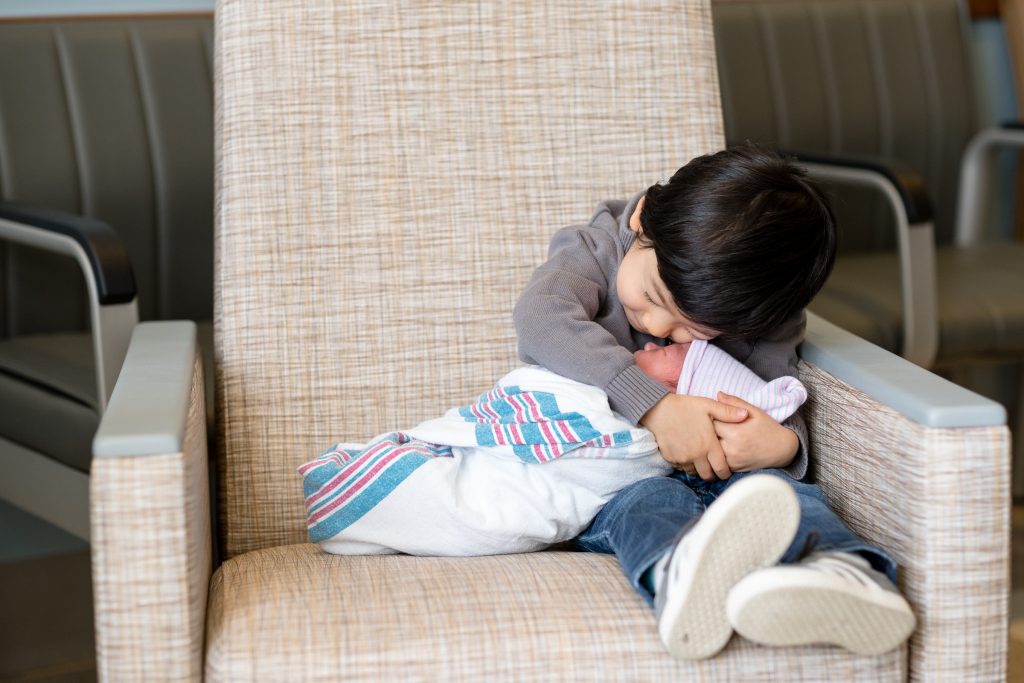 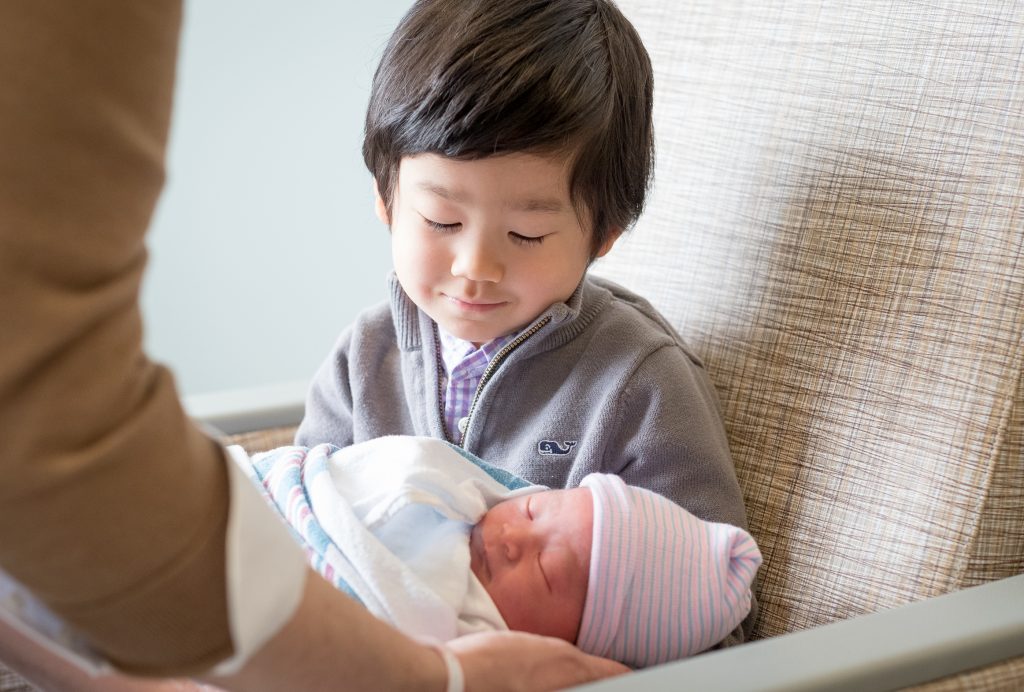 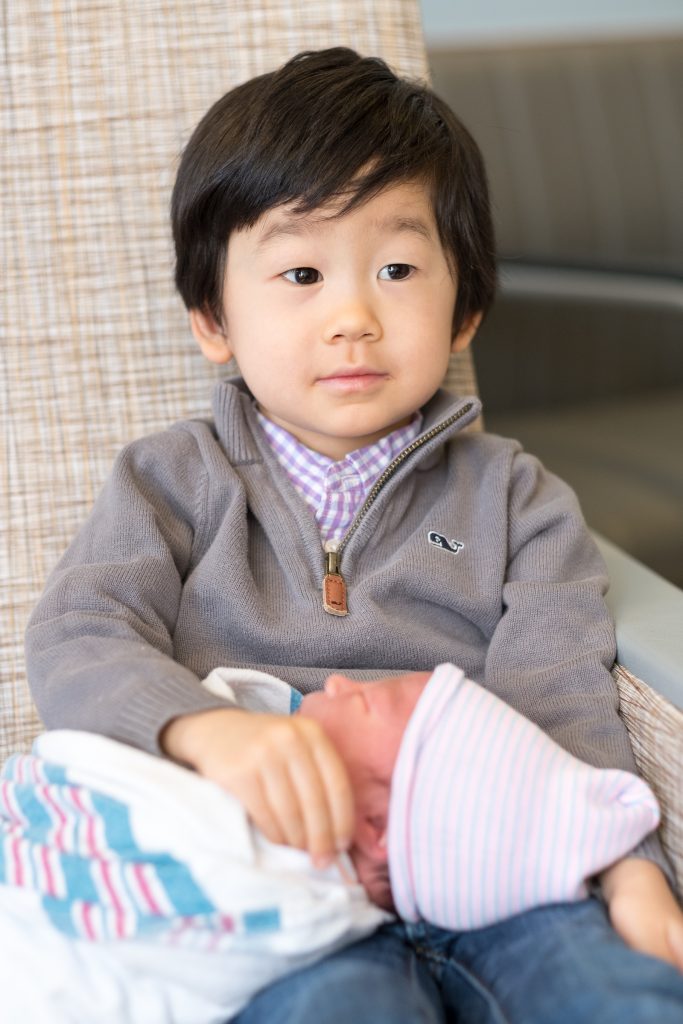 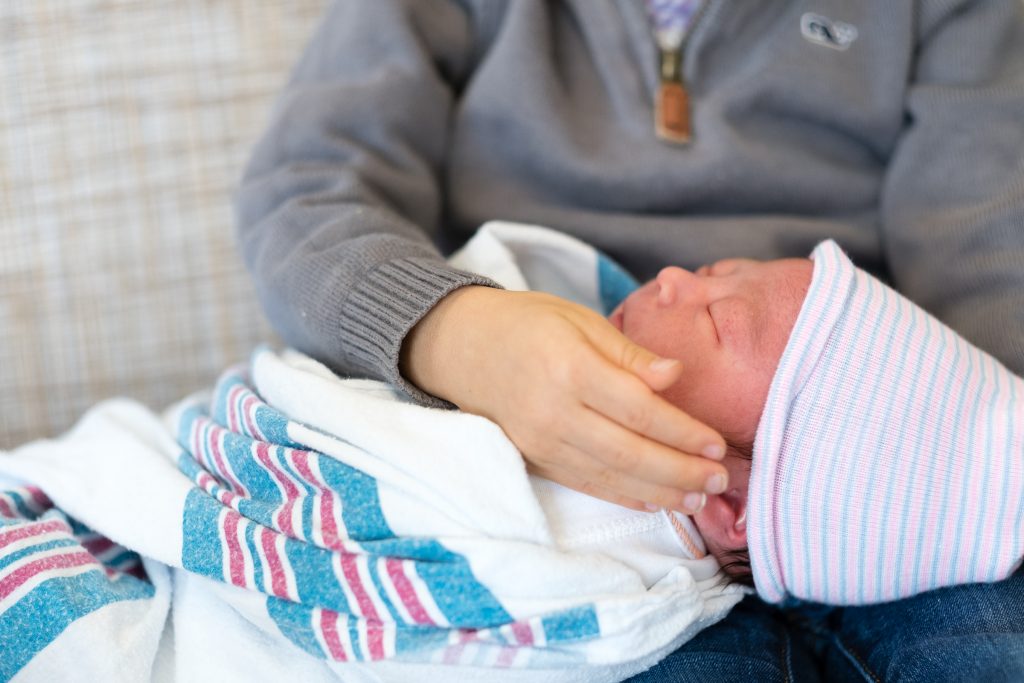 Bash loves having Baby Sister at home and is always curious about her every move.  As soon as he wakes up, he rushes over to her bassinet to see her.  He alerts us when she cries or lets out the slightest grunt and even brings over his step stool to assist with diaper changes.  He’s been so gentle and loving towards her and I just hope the honeymoon continues! As parents, we are thrilled at how loving and mature he is for a 3 year old; he is a sweetie. 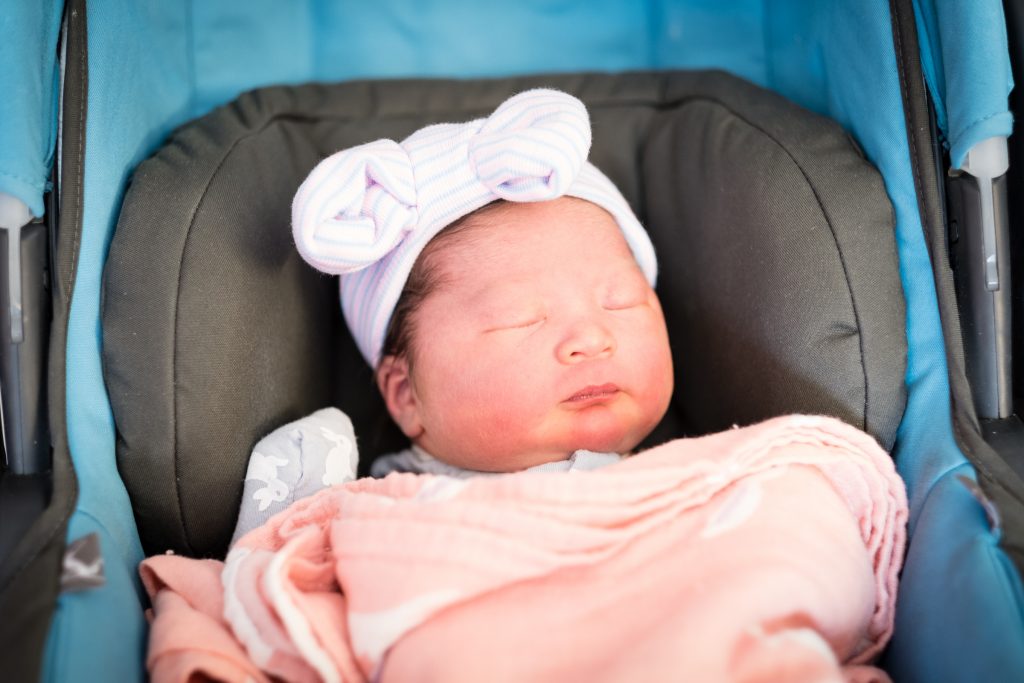 Ava seems to be settling into the classic newborn sleep-eat-poop routine.  She prefers to sleep with her hands out of her swaddle and seems to only poop when I’m holding her!  She is a fierce eater (Nick likens her rooting and latching to a shark attack – she wiggles around grunting and then goes in for the bite) and, despite her dainty expressions, she can go toe-to-toe with any frat boy with her explosive farts!

I’m feeling a million times better and walking a couple of miles a day.  I can’t wait to get back into my workouts to get more active and gain some energy.  For now, we’re just focused on trying to figure out how to incorporate Ava into our usual routine and get 2 kids and 2 adults dressed and ready to leave by 8:15!  Some days require a second cup of coffee but we are so happy with our newest addition to the family. 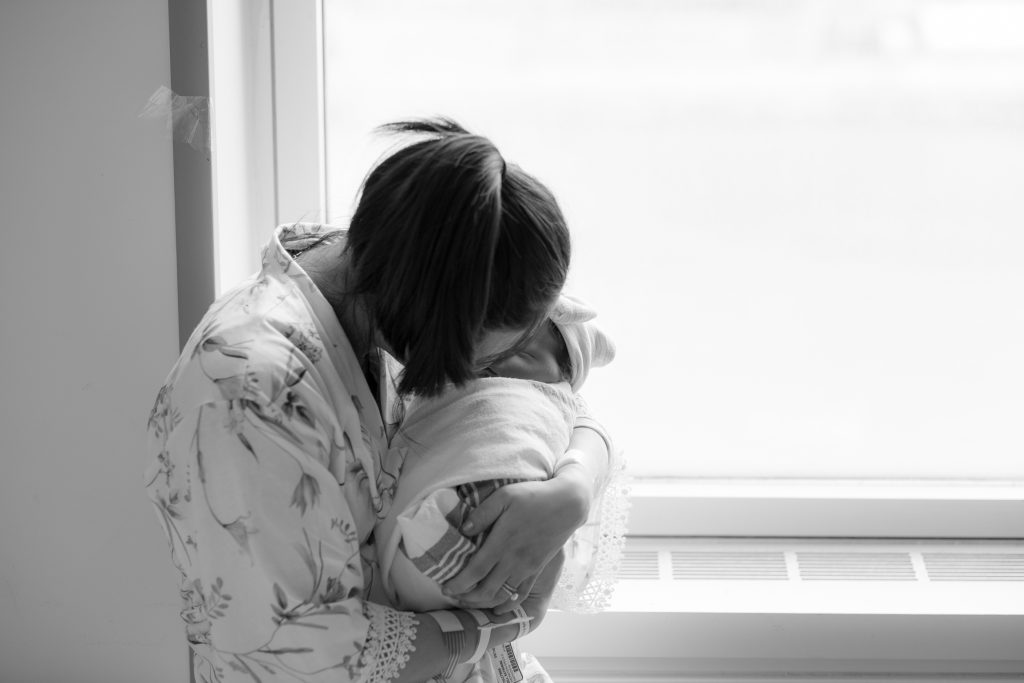 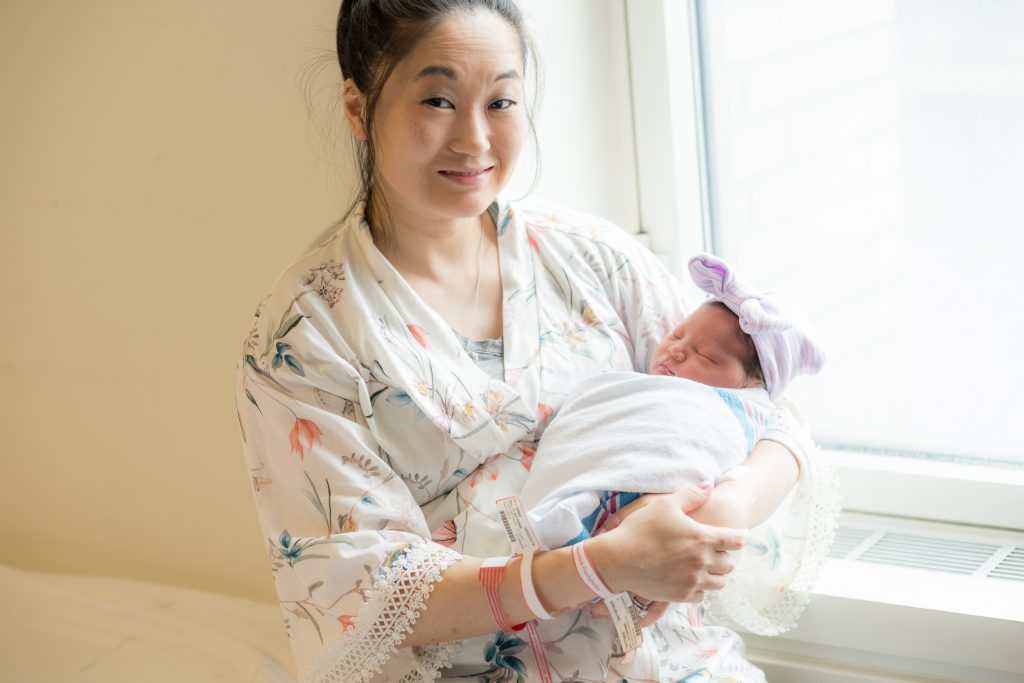 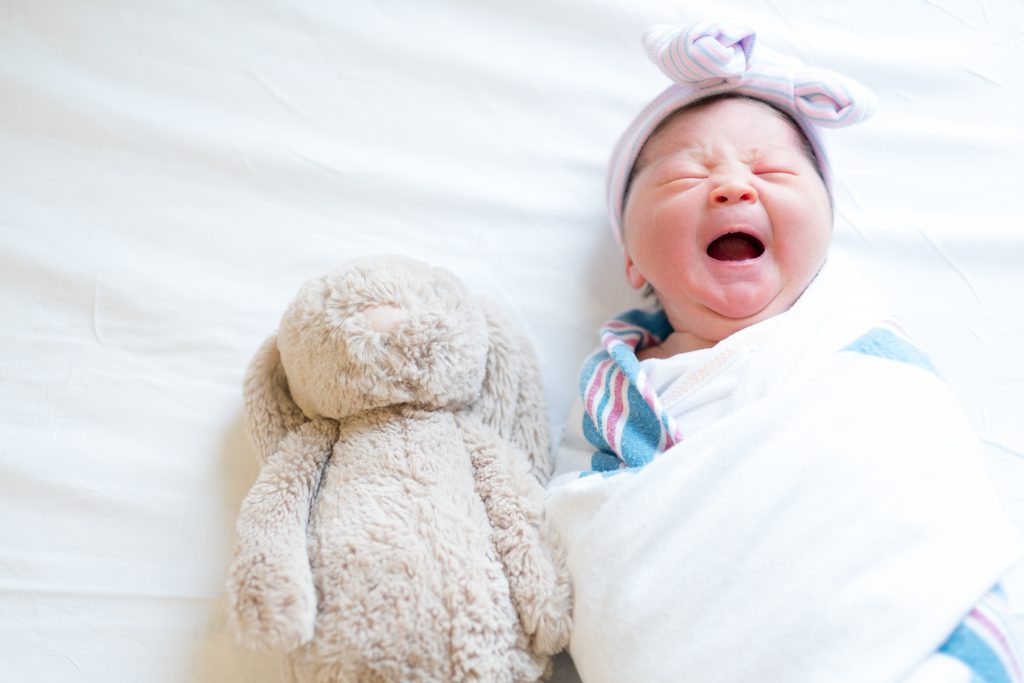 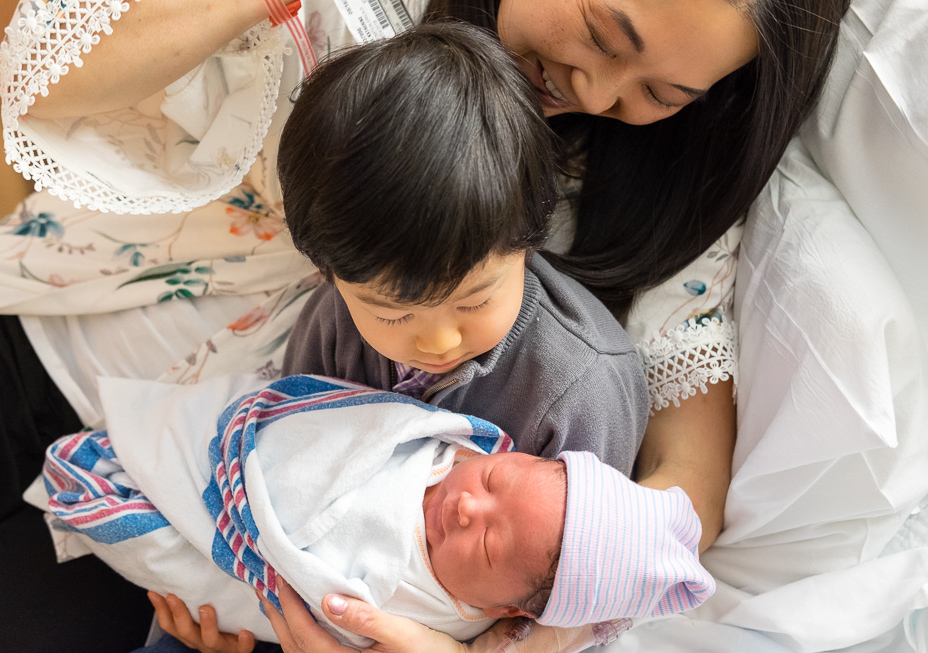 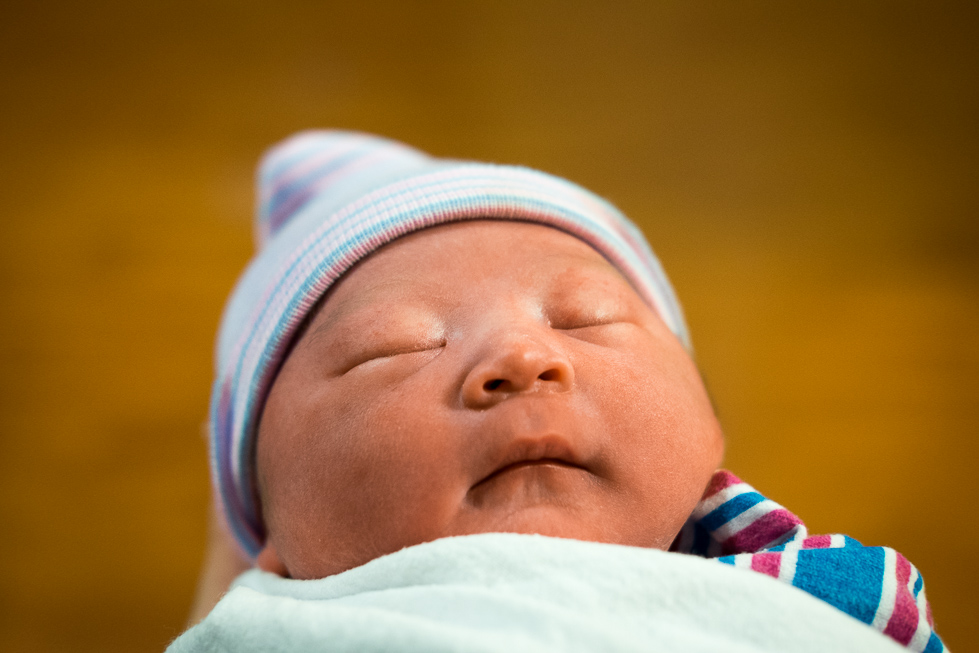